As iconic as it gets: Burj Al Arab

Billed by many as a “7-star hotel” or “The world’s most luxurios hotel” by Jumeirah Group, Burj Al Arab (The Tower of the Arabs) is an experience you have to try at least once in a lifetime. At the end of July we’ve checked-in at this iconic property to check-out what makes it so special.

“Collect moments, not things” they say. Moments of pure bliss which you will long remember – if not forever – after you’ve checked-out. Unforgettable moments spent with the person you love, moments that make you wish there was a way to freeze-frame time. Beyond the comfort, the amenities, the service, the glitz & glamour or the breathtaking views, each time we are reviewing a hotel / resort we’re also considering this: can it make a lasting impression? Can it give you enough reasons to rave about it, recommend it to all your friends and business partners? Can it make you dream about returning there sooner rather than later and experience it again?

From depths to stars

Take, for example, a romantic dinner for two in Al Mahara, Burj Al Arab’s signature seafood restaurant. Checked! Recognised as one of the finest dining venues in the world, Al Mahara (Oyster Shell) is accessed by a gold-plated elevator located in the upper lobby. Exit the elevator and you will be greeted by a golden entrance revealing a stunning floor-to-ceiling aquarium, The Oval, around which all of the dining tables are arranged. The huge jaw-dropping aquarium is home to many species of fish and marine life, from reef sharks to George, the Napolen-fish (humphead wrasse, for connoisseurs). With such surroundings, it’s easy to “take a dive” and get lost in the eyes of the person you love. We only had to sink into the soft seats at a table right by the aquarium and choose from the mouth-watering seafood delicacies. Add a fine selection of wines and the team of award-winning chefs – we’ve also experienced live cooking – and you get a memorable evening in one of the finest restaurants we’ve sampled so far. Haute cuisine at its best.

Or, if you fancy seeing The World and The Palm from above, you can head to Al Muntaha (“The Ultimate” or “The Highest”) restaurant and Skyview Bar, suspended 200 metres above the sea level. Two express panoramic elevators – travelling six meters per second – whisk you to the hotel’s 27th floor, where breathtaking views over the Arabian Gulf are part of the menu. We’ve experienced Al Muntaha in one of our previous visits at Burj Al Arab and we highly recommend it for afternoon tea or pre- and post – dinner drinks. It is the only place in Dubai to offer Mixology, the unique concept of creating personalized cocktails to suit guests’ tastes and mood. Together with their cocktail, guests also receive a card with the unique formulae of their personal drink. While Al Mahara and Al Muntaha are just two examples of the fine culinary experience awaiting guests at Burj Al Arab, you can check here the other dining venues. In total, nine world-class restaurants and bars.

Since we’re speaking about the hotel that put Dubai on the map, the arrival experience had to be special. For some, being transferred to / from Burj Al Arab in the latest generation Mercedes-Benz S-Class or GL-Class doesn’t quite cut it. How about arriving at this iconic hotel in a white Rolls-Royce Phantom? Automotive enthusiasts already know that Burj Al Arab has one of the world’s largest chauffeur-driven fleets of Rolls-Royces. Can the arrival experience go higher than this? All you have to do is ask. Guests can also arrive (depart) by a dedicated helicopter transfer service. They will experience a 15-minute birds-eye-view of the city, culminating in a dramatic landing on the hotel’s helipad on the 28th level. Yes, the same helipad where Andre Agassi and Roger Federer played tennis, where Tiger Woods and Rory McIlroy performed some golf shots, where a Vanquish supercar was airlifted to mark Aston Martin’s centenary and the helipad where David Coulthard did some burnouts in a Formula 1 racecar. Surely this won’t be the end of such one-of-a-kind events organized here as Burj Al Arab turns 15 this December. Therefore, expect other PR helipad stunts to go viral on YouTube. Facilities and services.

Touring Burj Al Arab during press visits – like we did many times – or discovering some areas of the hotel when holding a reservation in one of its restaurants / bars and actually checking-in for a stay are two different things. Our flight landed in Dubai at 8 PM, so we arrived at the hotel a little over one hour later. As the car waved through traffic on Jumeirah Road and inched closer to the security gate, the hotel’s impressive sail – lit in white when we arrived – caught my attention. Although we’ve photographed it many times and watched every documentary aired on this iconic property, the hotel still seemed magical, holding some secrets waiting to be discovered. “Welcome to Burj Al Arab, Mr. Stefan!” said the security officer before allowing the car to cross the slender, gently curving causeway connecting the mainland to the man-made island, 280 metres offshore.

At the hotel’s entrance we were greeted by Claudia, a member of the staff who smiled and asked how the flight was before accompanying us in the lobby. There, a short traditional welcome ceremony followed, with dates and Arabic coffee. If you’re expecting the usual check-in procedure at Burj Al Arab, think again. After all, it wouldn’t be too pleasant for the hotel’s distinguished guests to queue in the main lobby, would it? That’s why Burj Al Arab offers in-suite check-in and check-out. After the welcoming ceremony, Claudia accompanied us to our suite (2202), located on 22nd floor – the hotel has 202 duplex suites spread on 25 floors. Upon exiting the high-speed, ear-popping elevators – some of the fastest in the world – we’ve arrived at the reception desk found on every floor. Here we met the butlers in attendance 24 hours a day, ready to address every request guests might have. Not a bad feeling!

Once the check-in formalities were smoothly completed, our private butler showed us around the suite and did a walkthrough of the state-of-the-art technologies available, a remote controlled environment including curtains, TV, in-suite music and lights. More than just fulfilling our requests, there were several occasions during the stay when Burj Al Arab’s staff anticipated our needs before we voiced them, which felt rewarding. Speaking about this, we can’t go further without mentioning the three Hallmarks, rules at the core of Jumeirah’s service philosophy which every employee follows in his / her daily duties: I will always smile and greet our guests before they greet me; My first response to a guest request will never be no; I will treat all colleagues with respect and integrity. Another interesting fact: there are over 1,600 colleagues from 75 countries working in Burj Al Arab, which makes the staff-to-suite ratio 8:1. It is one of the highest in the world, ensuring a personalized service and luxury pampering for all guests.

Suite 2202, 22nd floor and breathtaking views of Palm Jumeirah. This was our 170-square meter home for a few days. With rich colors and extensive use of gold – found in other areas of the hotel, as expected – the suite’s interior won’t please everyone’s tastes. If you don’t understand Middle Eastern culture, then Burj Al Arab will seem kitsch. If you know a thing or two about their way of living and their expectations, then you’ll feel right at home. Your own 24-hour butler, ready to accomplish every request, should also help, or the 24-carat gold iPad (US $8,100) which guests are allowed to use during their stay. A side note: these gold iPads can be purchased from the hotel’s shop alongside iPad Mini, iPhone 5 and BlackBerry Q10. Gold-plated, obviously. We also wanted to purchase two iPads, but they were sold out. Well… better luck next time!

The goodies list continues with a set of 14 his and hers (Kelly Caleche) full-size Hermes amenities, including Eau de Parfum and Eau de Cologne, and a master bathroom complete with full-size Jacuzzi and separate five-head rain shower. A selection of 17 types of pillows, exquisite Egyptian bedding and an ultra-deluxe super king bed should provide the ultimate sleep experience. Last, but not least, hi-tech aficionados will smile upon playing with a 21-inch iMac, 42-inch and 28-inch widescreen interactive HD LED TVs, a Bose iPod/iPhone docking station and media hub or the private all-in-one printer, copier, scanner and fax.

Although this wasn’t our first press tour of Burj Al Arab, it was the first time when we’ve accessed one of the two amazing Royal Suites occupying the entire 25th floor (thank you, Kim!). Palatial in every sense, each of the two 780 square meter Royal Suites has been designed with an opulent color scheme, sumptuous furnishings and exclusive amenities, including a private lift and cinema – bring on the popcorn! As only the best will do for Royal guests, both floors feature natural light and breathtaking, uninterrupted views over the Arabian Gulf. You can’t quite describe how vast this suite feels until you experience it first-hand. Besides the amenities from “our” Deluxe One-Bedroom Suite, each of the Royal Suites boasts a private dining area for 12, two personalized bars (upstairs and downstairs), two King Size beds – one of them, revolving – and two large dressing rooms. Also factor in the world’s largest brigade of butlers (available 24 hours), daily breakfast buffet for four in Junsui, Bab Al Yam or in the privacy of the suite, as well as separate staff entrance with private butler’s kitchen, an exquisite majlis style lounge plus a library and you get a picture of how it feels to live like Royalty. More accommodation options. 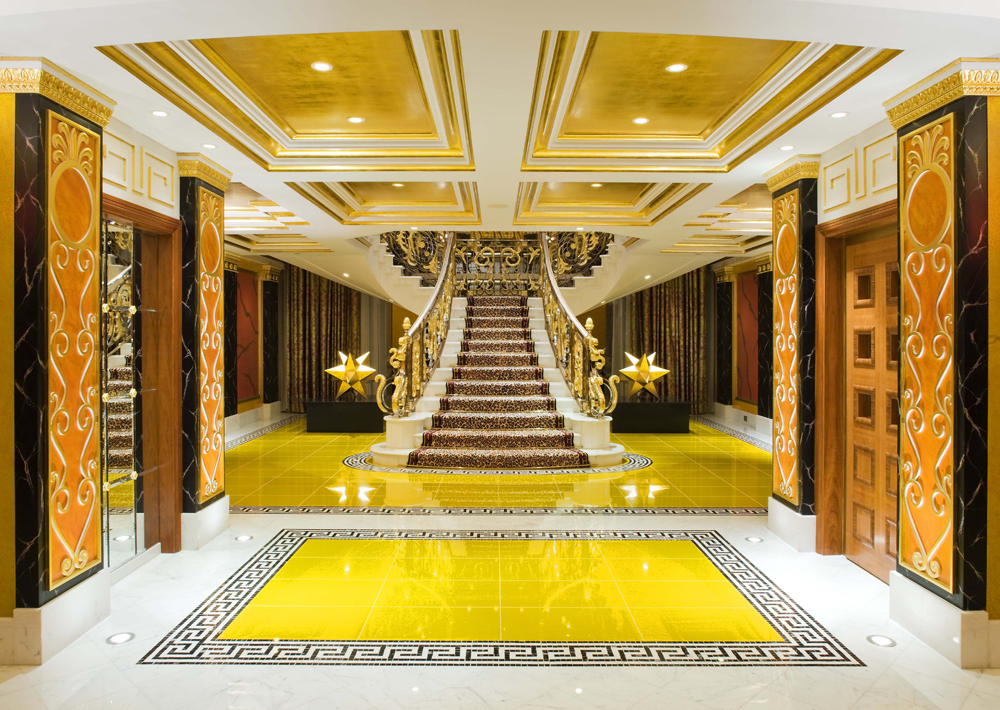 In focus: the youngest guests

If you thought kids don’t quite fit in the Burj Al Arab picture, think again. Whether it’s splashing around, face painting, playing sports, watching movies or doing crafts, the youngest guests will have the time of their lives at Sinbad’s Kids Club, located on the 18th floor. You can also use the 1,178 square meters Sinbad’s Kids Club (both indoors and outdoors) at Jumeirah Beach Hotel, Burj Al Arab’s sister property shaped like a wave. Older kids can choose from a range of alternatives tailored to them and all activities taking place within the Club are supervised by a trained, professional team. In-suite babysitting services are also available upon request.

Then there’s Wild Wadi Waterpark, where the young and young at heart can splash all day long. Situated in front of the Burj Al Arab and themed around the tale of Juha, a known character from the Arabian folklore, Wild Wadi offers 30 rides and attractions for the entire family. Kids will also love the Dubai Turtle Rehabilitation Project, currently the only project of its kind in the Middle East and the Red Sea region. Based at Burj Al Arab and Madinat Jumeirah, the project has been running in its current form since 2004. So far, it has seen the release of over 560 rescued sea turtles back into Dubai’s waters. In 2011 alone over 350 sick or injured sea turtles have been treated by the Dubai Turtle Rehabilitation Project after being washed up on the region’s beaches. More activities. 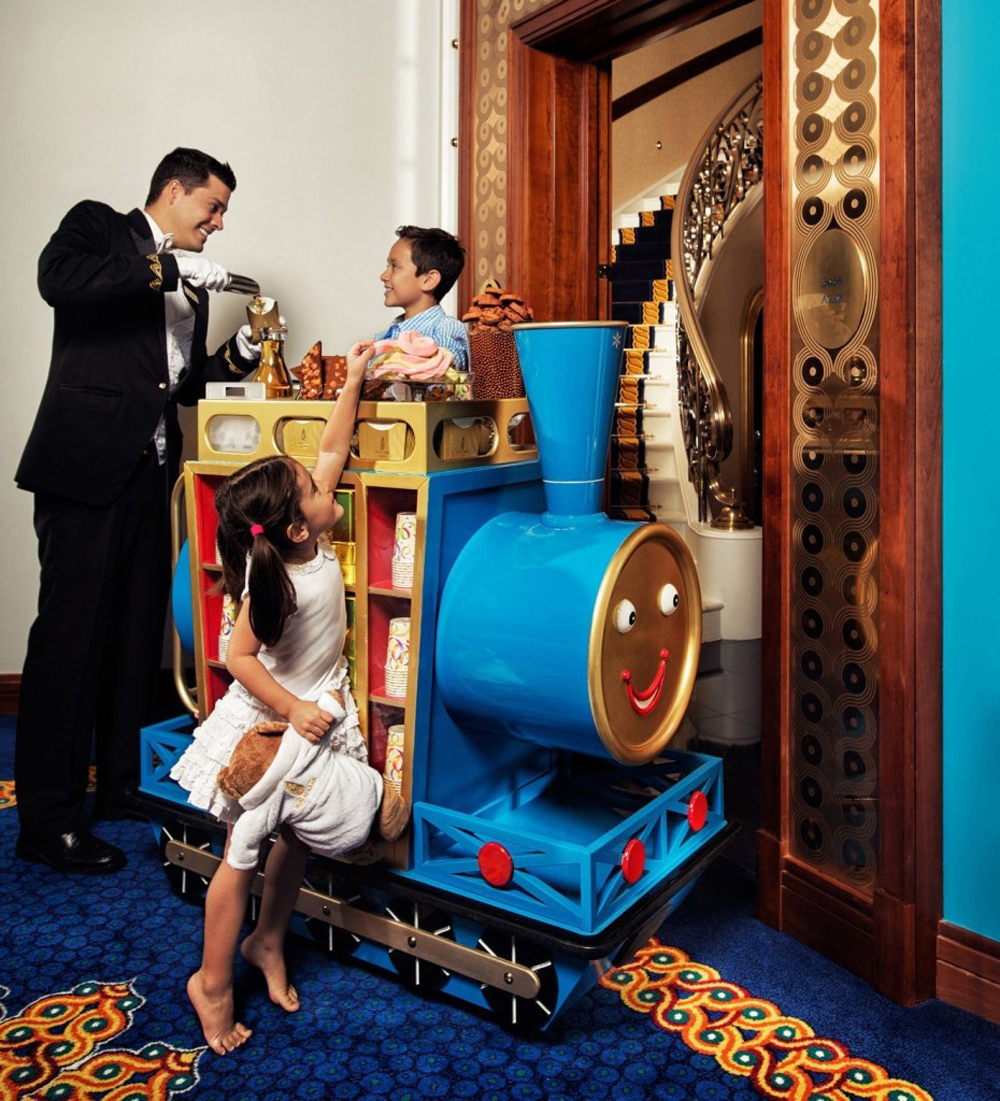