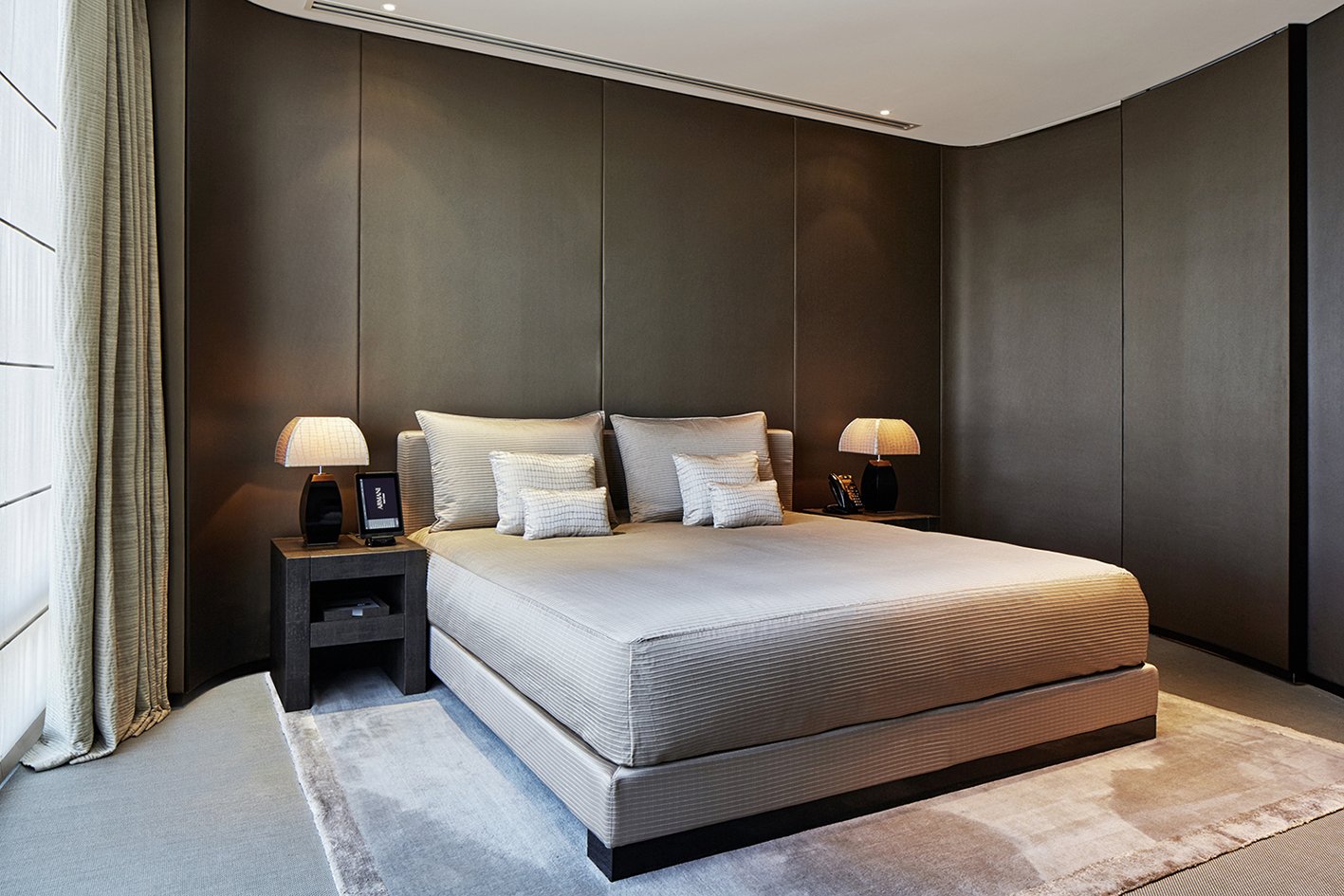 It ranks amongst the 65 hotels included in the Conde Nast Traveller “Hot List 2011″and is located in Burj Khalifa. The world’s first Armani hotel dazzles with style, services and cutting-edge technologies.

Armani Hotel Dubai is a statement signed by one of the world’s biggest fashion designers. In partnership with the developer Emaar Properties, Giorgio Armani ventured into the hospitality sector determined to make a lasting impression. Starting with the location, Armani wanted a famous one: Burj Khalifa, the tallest building in the world. Moreover, the hotel is adjacent to Dubai Fountain, a magnet for tourists with its dancing water jets and light shows. From the concourse level to the 8th floor, then to the 38th and 39th levels, Armani Hotel Dubai offers 160 luxurious rooms and suites modelled after the fashion designer’s vision. Guests can choose 24 Armani Deluxe rooms, 54 Armani Classic rooms, 26 Armani Premiere suites and 4 Armani Premiere suites with balconies. Then there are 26 Armani Fountain suites, two Armani balcony Suites, 12 Armani Executive suites, 3 Armani Ambassador suites and 3 Armani Ambassador balcony suites. The height of luxury are the 5 Armani Signature suites and the Armani Dubai suite. Armani Dubai also offers 144 serviced hotel apartments spread between floors 9 and 16 in Burj Khalifa.

The “Stay with Armani” one-of-a-kind experience begins right as you enter the hotel.

The lobby is dominated by an impressive wooden arch, which is also the hotel’s logo, flanked by two check-in desks. The formalities are dealt with by one of the Lifestyle Managers who take care of guests from the moment they book a room or suite until they leave the hotel. These Lifesyle Managers are on call round the clock and can be contacted anytime to fulfill the guests’ requests. The 5-star services are accompanied by furnishings worthy of the Armani name. Each detail bears the signature of Giorgio Armani himself, from the Eramosa stone floors, the zebrawood panels and bespoke furnishings to the amenities exclusively designed for Armani Dubai. All around the hotel the simple yet elegant spaces, the flawless finishes and the select colours reveal unique textures and “clean” lines, in harmony with the daring architecture of Burj Khalifa. No matter where you are in the hotel, state of the art techologies play an important role. The doors have no peepholes, but a wall-encompassed video camera. Next to it we find a touch-screen which opens/closes the door, controlls the electrically-operated curtains and light settings – quite a few! These controls can also be accessed via the black touch-screen remotes in every room/suite.

Just like the rooms and suites, the hotel’s restaurants were styled according to Giorgio Armani’s wishes.

The hotel offers 8 restaurants with a wide variety of delicacies, from the Japanese and Indian cuisine to Mediterranean and Italian fine dishes. Armani/Lounge guarantees breathtaking views of the Dubai Fountain, while Armani/Mediterraneo invites guests to delicious breakfasts. If the flavours of Tuscany can be enjoyed in Armani/Ristorante, Armani/Amal is the place for Indian culinary delights. Armani/Hashi targets the lovers of Japanese cuisine, while Armani/Peck captures the essence of Italian genuine gastronomy. Last, but not least, Armani/Lobby recommends itself as a “smart-café”, with Armani/Privébeing the VIP lounge where Dubai’s hottest and most fashionable parties take place.